Since departing from NBC’s The Tonight Show in 2014, Jay Leno’s household name has extended into the garage. As one of America’s most beloved car enthusiasts, Leno takes his hobby very seriously with no less than 169 automobiles and 117 motorcycles. Housed in Big Dog Garage in Burbank, CA, Leno recently invited us to spend the day with him to document how we helped him repair his custom-built EcoJet concept car using our end-to-end 3D design and manufacturing solutions.

Jay and his team didn’t hold back while building the one-of-a-kind EcoJet, which features a 650 horsepower Honeywell turbine engine. Because it’s basically a car wrapped around a jet engine, the EcoJet cannot be started inside the garage and must instead be wheeled out before spooling up the engine. On one of these trips, the delicate vents behind each door broke. Without a CAD file to work from, Jay and his team came to us with the task of digitally manufacturing perfect replacements.

The day started early for our crew, arriving in advance of our host for set up. Once Jay arrived, he set the tone for a genial filming, taking the time to shake hands and make first-name introductions with everyone before getting down to business. As summarized by one of our crew, “Jay Leno is just a regular guy who happens to be famous and happens to really love cars.” 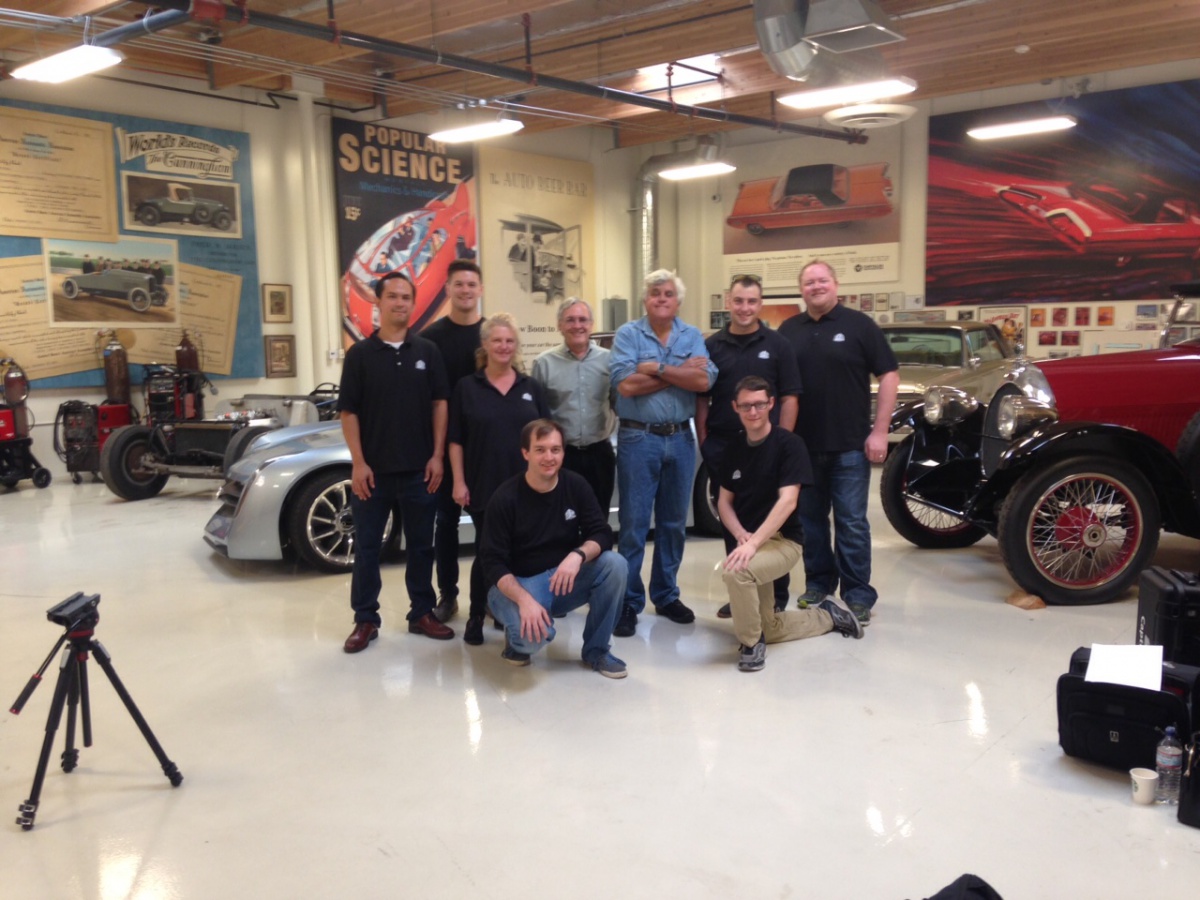 No stranger to 3D digital design and fabrication, Jay was enthusiastic about the contribution of our technology to his collection. Using 3D Systems’ printing and materials, software, and on demand parts service Quickparts, Jay says he can now acquire “any part for any car, cheaper, faster and more efficiently than ever before.”  In the particular case of the EcoJet, we were even able to improve the vents we replaced by using our exceptionally lightweight and durable SLS DuraForm® HTS material.

Though we had only been promised 20 minutes for our interview, Jay courteously extended his time with us to make sure we got everything we needed – including a garage tour. Jay says he drives at least 5 vehicles per day to ensure they’re all in proper condition, and that maintenance has become much easier for him and his mechanics with the addition of our technology.

Jay’s chief engineer, Jim Hall, was equally gracious. Without 3D scanning and the advanced scan-to-CAD capabilities of Geomagic Design™ X, repairing the EcoJet would have taken Jim weeks of painstaking labor in the machine shop. With our technology, Jim could restore the part and send it off for printing at Quickparts in less than 30 minutes. “It’s life-changing for us,” said Jim.

But 3D design and fabrication solutions are doing more than saving us time and energy, they are allowing us to design for performance rather than manufacturing, as well as bringing legacy- and custom-parts into circulation. “The fascinating thing is that automobile manufacturing has changed more in the past decade than it previously did in the past century,” said Jay.

We are grateful to Jay and his team for the privilege of assisting in the EcoJet restoration and for trusting our 3D products and services to keep his collection on the road.

We invite you to step into Jay Leno’s garage and experience the future of car restoration for yourself in this video.