The hope is now visible in the face of Rachel Uwimana, a 15-year-old Rwandan who suffered from fibrous dysplasia—a bone disorder in which scar-like tissue develops in place of normal bone—that severely disfigured her cranium and the orbital bone surrounding her left eye.

Thanks to a combination of human compassion, surgical skills and advanced technologies that include Virtual Surgical Planning (VSP®) and 3D printing from 3D Systems, Rachel now smiles and laughs easily, reactions that were seemingly impossible a couple of years ago.

Rachel was first treated for fibrous dysplasia in Rwanda. Doctors performed surgery that included an implant that was not accepted by her body, and eventually the contact of the implant with her nasal cavity led to an infection.

Dr. Harshbarger was an early adopter of virtual planning, having first used 3D technologies to plan complex surgeries in the early 2000s. He began working with what is now the 3D Systems Healthcare Technology Center in 2009 and has since performed hundreds of operations aided by Virtual Surgical Planning and 3D printed models and guiding tools.

The first surgery, performed in late March 2015, included removal of a large area of bone cement from the Rwandan operation, treatment of the infected frontal sinus, resection of the fibrous dysplasia, soft tissue reconstruction with tissue transferred from Rachel’s thigh, and skeletal reconstruction.

Using Rachel’s CT scan data, 3D Systems worked with Dr. Harshbarger and the rest of the surgical team via web meetings to lay out the procedures for the operation and to digitally simulate the bone cuts that would be done on the operating table.

For the first operation, 3D Systems printed a model using its ProX® stereolithography technology that showed what Rachel’s skull would look like once extraneous bone was removed.

Two surgical guide templates were also created; one helped Dr. Harshbarger position a temporary patient-specific titanium mesh to protect Rachel’s eye socket region, and the other represented the bony overgrowth that needed to be removed from Rachel’s skull.

“The positioning template was designed to help Dr. Harshbarger make a reference mark on the bone that would then be used to help ensure that the custom PEEK implant was positioned as designed,” says Mike Rensberger, who heads up 3D Systems’ VSP Reconstruction services.

PEEK stands for polyether ether ketone, a high-strength plastic that KLS Martin uses to create patient-specific cranial implants. In Rachel’s case, the two-piece implant covers the cranial bone in the forehead along with the orbital areas surrounding the eye socket and the upper cheekbone.

“The challenges in creating this design were in producing the exact contour that is aesthetically correct as well as functionally possible to implant during surgery,” says Tirth Patel, a CT-based implant specialist at KLS Martin.

“3D Systems worked closely with Dr. Harshbarger to plan the exact movement of the bone,” says Patel. “We took the digital files from 3D Systems and created an individualized design that would help Dr. Harshbarger perfectly position the implant to create a smooth surface on the forehead.”

“Virtual Surgical Planning and the 3D printed models, guides and templates from 3D Systems made that type of accuracy possible.”

The second operation was successful and addressed the major issues of Rachel’s cranial reconstruction. Dr. Harshbarger has suggested cosmetic surgery in the future to correct skin color disparities from tissue transfer and to expand Rachel’s scalp area.

From hope to opportunity

About a month following the second surgery, Rachel was chosen by Seton Healthcare, a member of the Ascension organization, to travel to Washington, D.C., to hear Pope Francis address the U.S. Congress. She made the trip with Dell Children’s Medical Center case manager Dee Brosnan, who is acting as host mom during Rachel’s stay in Austin.

“Our efforts must aim at restoring hope, righting wrongs, maintaining commitments, and thus promoting the well-being of individuals and of peoples. We must move forward together, as one, in a renewed spirit of fraternity and solidarity, cooperating generously for the common good.”

As of Spring 2016, Rachel is living with Brosnan and attending International High School in Austin, where she is learning to speak English. Her plans are to stay in Austin through June to finish school, then return home to her family in Rwanda, a different person physically, mentally and emotionally. 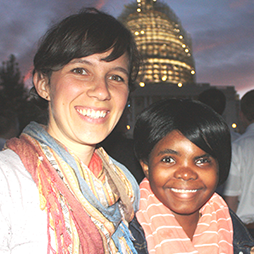 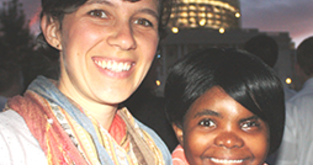 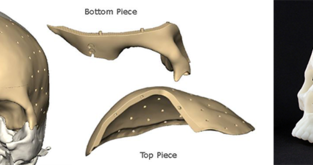